Before my trip to Phnom Penh, I remember feeling a pervasive sense of cynicism and weariness about the world. 2016 was a trying year, especially with it being characterised by all the chaos and political turmoil that many around the world had to endure. The disillusionment was omnipresent, and as much as I hate to admit, it seemed as if our humanity was on the edge of destruction.

Dramatic, I know. But it honestly felt that way. The Youth For Change (YFC) conference helped show me that there is always a source of light in an abyss, and for that I will always be grateful.

At the conference, I met so many new people from a range of cultural backgrounds and ethnic compositions. There were youths hailing from Korea, the Philippines, Taiwan, Indonesia and Cambodia amongst others. Despite our different languages, it didn’t stop us from joking and laughing with one another during our game of Bingo or when we tried desperately (and perhaps rather unsuccessfully) to learn other languages such as Khmer or Tagalog during our peer-tutoring session. These games did wonders in helping us break the ice and immerse ourselves in other cultures. 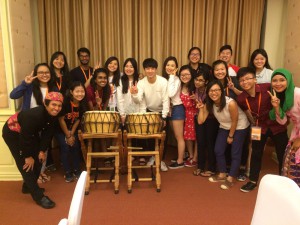 Friends from Singapore, Indonesia and Korea trying our hand at the traditional Korean drums. We were coached by expert drummer Yongsung Kwon (who, by the way, could definitely pass off as a Korean star). 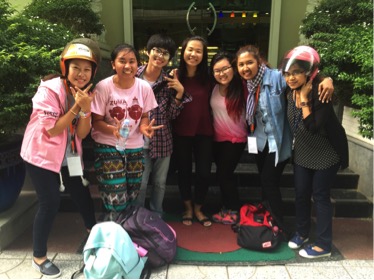 Capturing memories with our Cambodian friends.

What struck a deep chord with me on the first day was when we were asked to share about some of the advocacy work that we’ve been doing. While I try to engage in advocacy work to raise awareness about prevalent issues such as gender equality and gender-based violence, what my new friend, Ronnie Hingco, shared with us was deeply heart-warming and remarkable to say the least. Ronnie works with local government officials to advocate about the laws in the Philippines that protect the rights of women and children. Not only is he deeply passionate about helping alleviate the issues that women and children face in his country, but he is also living proof that men can support women's rights and should play a part in constructing a world that respects and upholds the rights of women and children. He was also a sponsored child under World Vision, and now gives back to society by being a strong voice for those in his community. 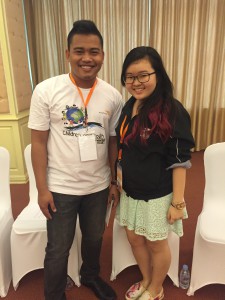 A picture of Ronnie and myself after our one-to-one discussion on the work that he does in the Philippines.

There are many other youths whom I met who are doing extraordinary things to help shape a better future for their own communities too. While the challenges they have to surmount vary based on the countries they reside in, the common thread that binds all of them is their deep-seated desire to learn and help improve the world. Getting to meet youths like these who have defied any restrictions that may have been placed on them due to their perceived “inexperience” really blows my mind, and gives me so much hope for a better and brighter future for generations to come.

While I’ve learnt about many social issues at the conference and have hopes of turning this new knowledge into a tangible product that will serve a greater purpose, my music journey with my fellow Music Ministry companions has also been a fulfilling one thus far. We had held several practice sessions before the trip to ensure that we were fully prepared for the Cultural Exchange Concert. Our resident virtuoso Peiwen channelled her music prowess from the steady beats of the cajon to the black and white keys of the piano. David, with his deft fingers and musical intuition, was able to improvise on the spot to help jazz up our sound too. And of course, our up-and-coming singer/songwriter Falice helped spice things up with her effervescent personality and contagious beaming smile by getting the crowd hyped up and ready to chant “Chan Mali Chan!” with us.

But the one activity that left an indelible mark on me would be our music engagement session with the street children of Phnom Penh. Our time with them proved to me how music and the performing arts can bring such pure, wholesome joy to everyone. There was an impromptu performance segment facilitated by the World Vision staff, where the children came up to perform whatever they fancied. There was a talented beatboxer, a troupe of enthusiastic dancers who bobbed to "What Does The Fox Say", martial arts prodigies, pop soloists and duos… We ended up getting to enjoy an eclectic concert, free of charge. And the best part of it all was that the children were actually enjoying themselves. The radiance that these children, who often have very little, exuded by engaging in the simplest of activities resonated deeply within me. 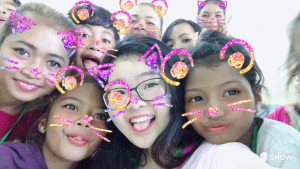 Taking fun and crazy selfies with our favourite app, Snow!

When we had to say our goodbyes, a flurry of hugs that I hadn’t expected deluged me. I turned to look at Falice, who was in tears by now, and I lost it. The waterworks started and poured down my face, unrestrained. I looked up and saw one of the children crying too. It was as if I was staring into a mirror of emotions, a reflection of humanity. It was an epiphanic moment for me when I realised that we are, in fact, all the same. We all live under the same sky and walk the same earth, yet sometimes, the types of injustices we face differ based solely on our place of birth.

My teenage years and perspective have completely and irrevocably been changed because of my experience with them. Though I understand that it is the work of the World Vision staff that will ultimately leave a more personal impact on the lives of the street children, my time with them has allowed me to understand their plight in a clearer and deeper manner, and will hopefully aid me in raising awareness about their predicament through the Music Ministry. And perhaps, with the great invention that is Facebook, I'll also be able to continue hearing about their journeys and where life takes them. 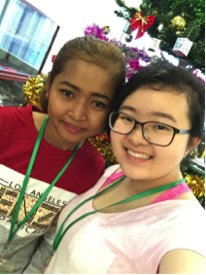 A picture with myself with Na Na, whom I still keep in contact with on Facebook. Sometimes, I go through my Cambodian friends Nafy and Sokhoeurn, or the handy Google Translate to communicate with her, since I don’t fully understand Khmer!

If I had to sum up this trip in one word, it would be this: humbling. I’m humbled to have met so many passionate youths who are actually being the change they wish to see in this world. I’m humbled to have witnessed the cosmic love and joy that music, combined with a smile that truly serves as the universal language of kindness, can bring. Most of all, I’m humbled to have worked with such a special group of musicians and youths, alongside our mentors Karen and Weijie, who have played such an instrumental (pun intended) role in our musical journey.

Finally, to those who have felt discouraged and disenchanted as I had before my trip, always know that with every casted shadow comes a source of light. It may be a muted one, but it is still there, its warm glow waiting to be noticed. And if we look hard enough, we will be able to find it.  After all, it only takes one spark to light up the dark…

Musicatalyst Musicatalyst are a group of youths under World Vision’s Music Ministry, united through a shared passion in music.