On 11-14 December 2017, close to 70 youth from Australia, Bangladesh, China, Malaysia, Myanmar, Nepal, the Philippines, Singapore, South Korea, and Vietnam came together in Yangon, Myanmar for the second edition of the annual Youth For Change Conference (YFCC). The programme threw the spotlight on the needs of children and families in conflict zones, areas devastated by climate change, and urban poor communities, and challenged participants to think about how they could be the difference in a fragile world. Through talks and workshops by seasoned field practitioners and policy thinkers with first-hand experience of working in humanitarian and community development settings, as well as field visits to World Vision’s ADPs in rural and urban areas around the Yangon region, our young change-makers learnt how they could contribute to the wider effort to develop solutions for the world’s most pressing problems. Aamir Bana, 19, from Singapore shares his experience.

The Youth For Change Conference was an eye-opening experience, and if you have the chance you should go too. You will come away with a deeper appreciation of how, beyond the anonymous headlines about humanitarian organisations helping people in far-flung corners of the world, there are real individuals sacrificing their time and energy for the betterment of others. That sort of thing takes your breath away, and no words can ever do these humanitarian and development workers justice. You need to sit next to them, annoy them with a dozen or so questions, and only then will you scratch the surface of their world. They deal with the most complex issues hindering life and happiness around the world, and for several days they are yours to pester and to blow your mind. 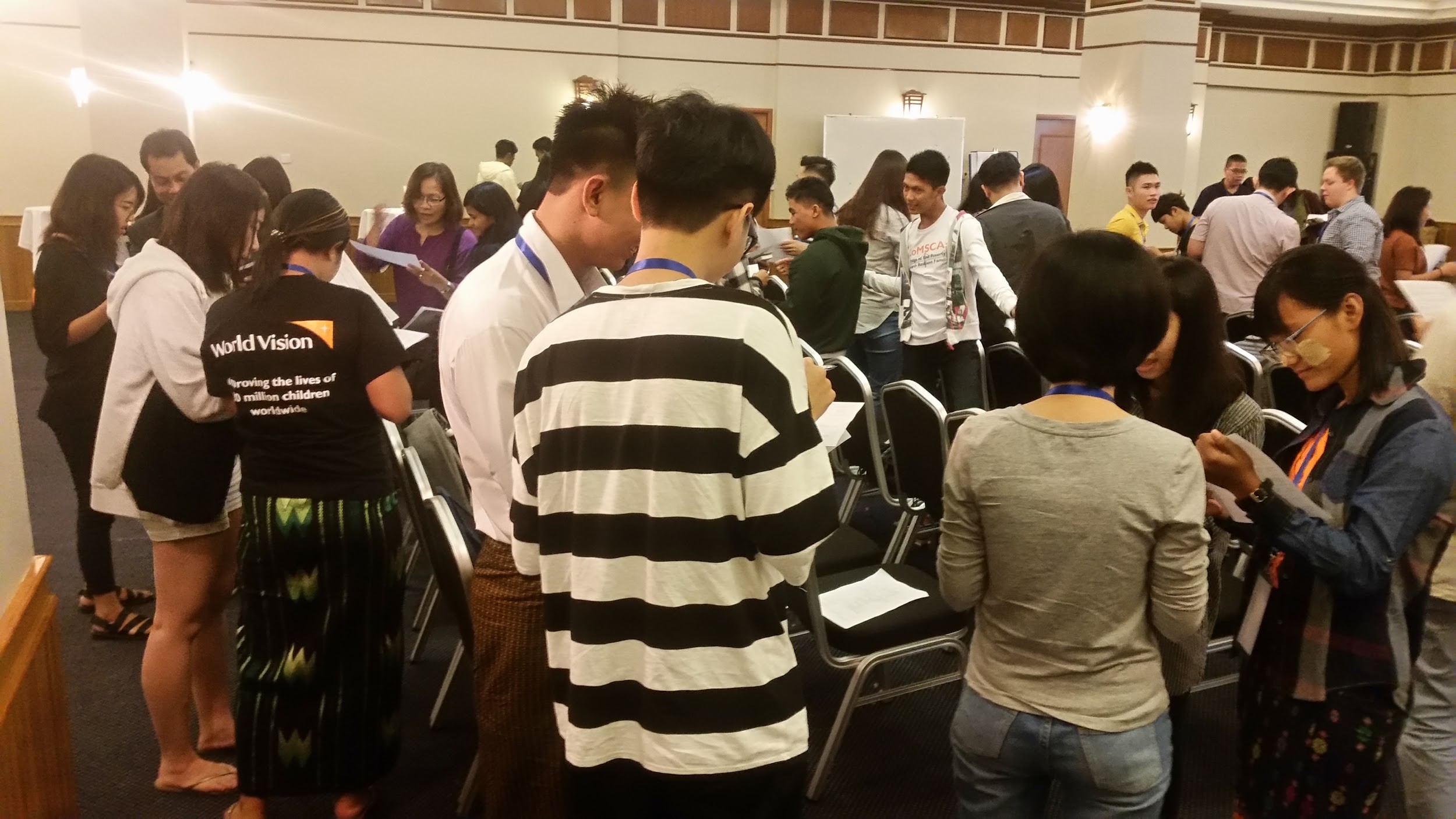 At YFCC, youth participants from various cultural backgrounds learnt from one another, as well as from humanitarian leaders.

The conference itself was a combination of interactive sessions with preeminent individuals from World Vision and other development-oriented organisations, and experiential learning journeys to World Vision’s ADPs. Dr. Kathryn Taetzsch was one of the speakers at the conference who became our resident rock star. Officially, she is the Director of Humanitarian Response & Private Sector Partnerships, and is a member of World Vision’s Global Humanitarian Operations/Global Rapid Response Team. Unofficially, she is a saint with the patience and humility to prove it. She broke down the way disaster analysts assess a crisis-stricken nation and shared harrowing stories of situations on the ground. She spoke at length about the diverse and dangerous obstacles that people in her line of work face, from physical threats to the gut-wrenching emotional struggles. She spoke about how a colleague of hers was kidnapped shortly after another aid worker was summarily executed by a tribal leader who had been denied extra food. She shared how she had to, at times, have a male colleague serve as an intermediary to negotiate with local patriarchs who, because of their regressive perspective on the status of women, did not give her the same respect as they might a male. The opportunity to hear first-hand about life on the ground is rare, and it made the experience invaluable. When speaking to Dr. Kathryn, one almost felt tempted to dedicate his life in a similarly selfless manner. 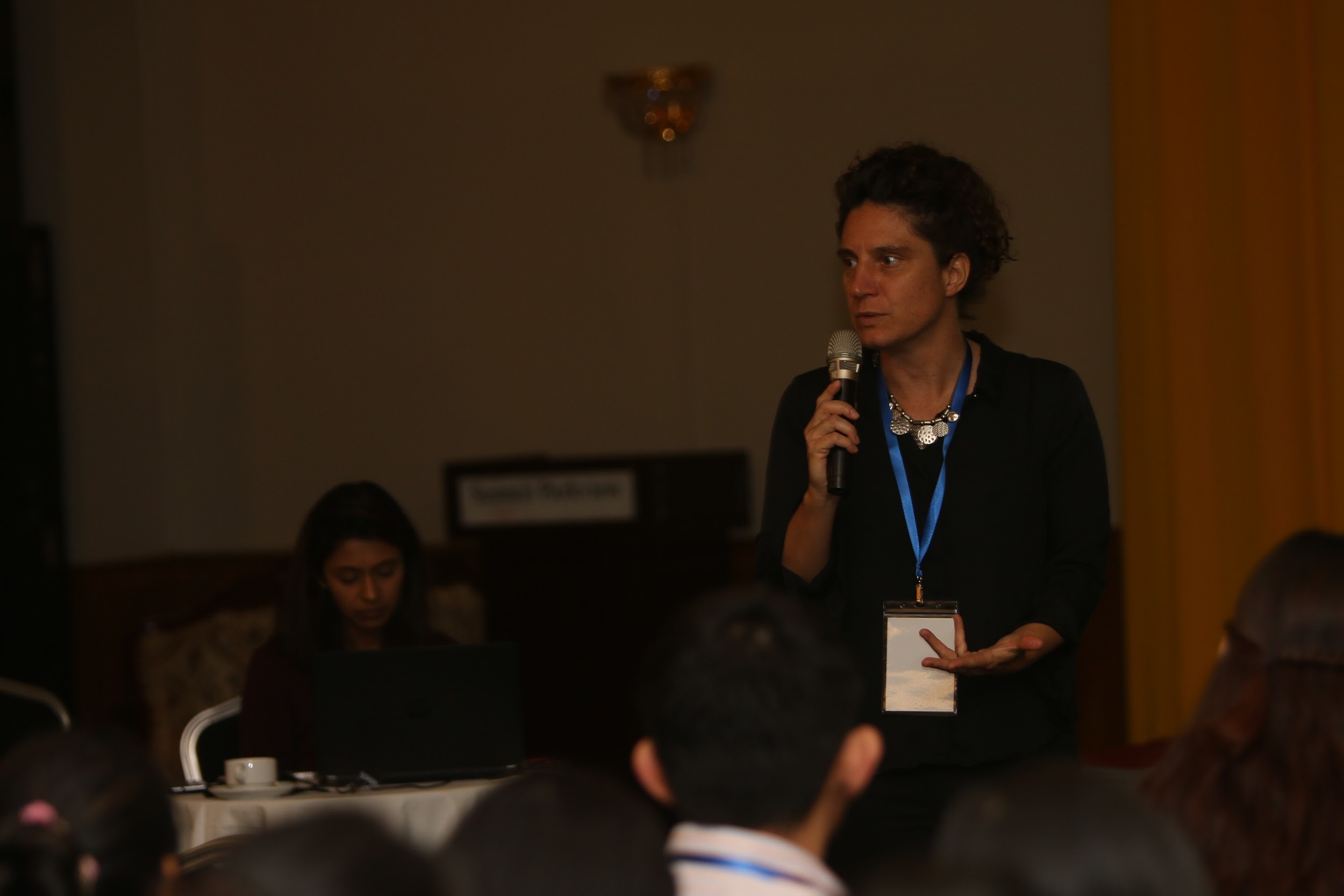 While the speakers were among the stars of the conference, the truth is fellow attendees were stars in their own right. For instance, we met a team from Bangladesh who were fierce advocates in the fight against child marriage. They shared with the conference participants how their unrelenting outreach programmes, aimed at both the public and police, sought to educate and to change mindsets about a damaging social norm, and how their tireless campaigning and lobbying had finally begun to yield results. In fact, we met a variety of individuals who came from within the World Vision family and from beyond it (some of them were even existing child sponsors). They all had unique stories to tell, and many of them had also been involved in community development programmes in their own home countries. You could begin the day speaking to a Vietnamese, have lunch with an Australian, and end it speaking to a Korean. It felt surreal to speak to so many people from so many parts of the world. Often these conversations were deep and meaningful. People were so open and willing to share their stories and their cultures; it felt unreal to have such an intimate look into their way of life. 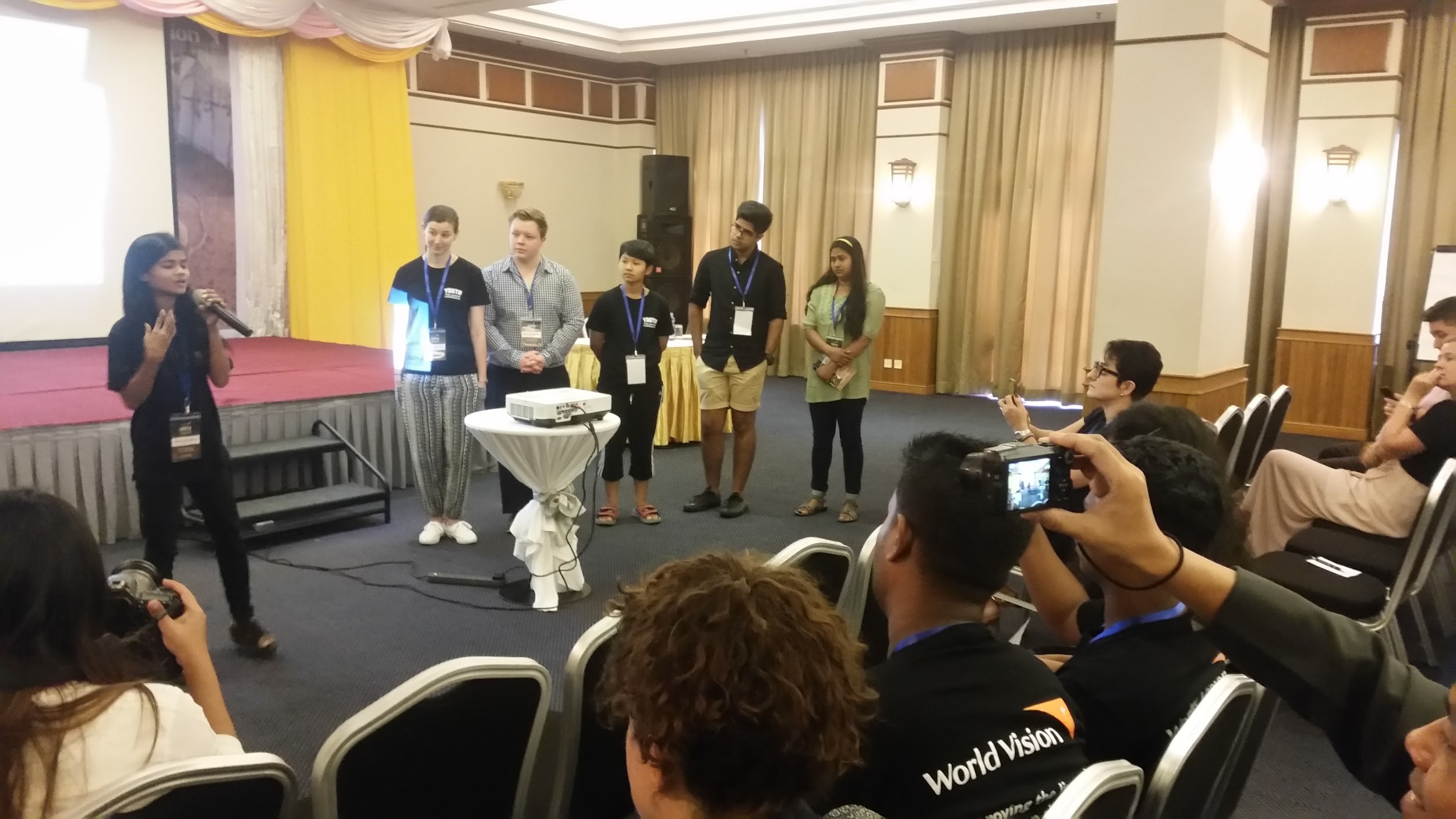 Perhaps the most memorable part of the conference was the opportunity to see first-hand the work of World Vision in the field. Some of us visited Kypein Seik village in Hmawbi ADP, where we met the remarkable Daw Doris Paul, the Manager of the ADP. This ADP, like others in the World Vision network, has multiple projects catering holistically to the diverse needs of the community. The project site that we toured was that of an economic livelihood intervention designed to financially empower rural families by diversifying their sources of income. Daw Doris Paul shared that World Vision had trained over 180 farmers in that community, and given them seeds and fertiliser so that they could make a living for themselves. The income they earned allowed them to send their children to school and give them a better shot at life. 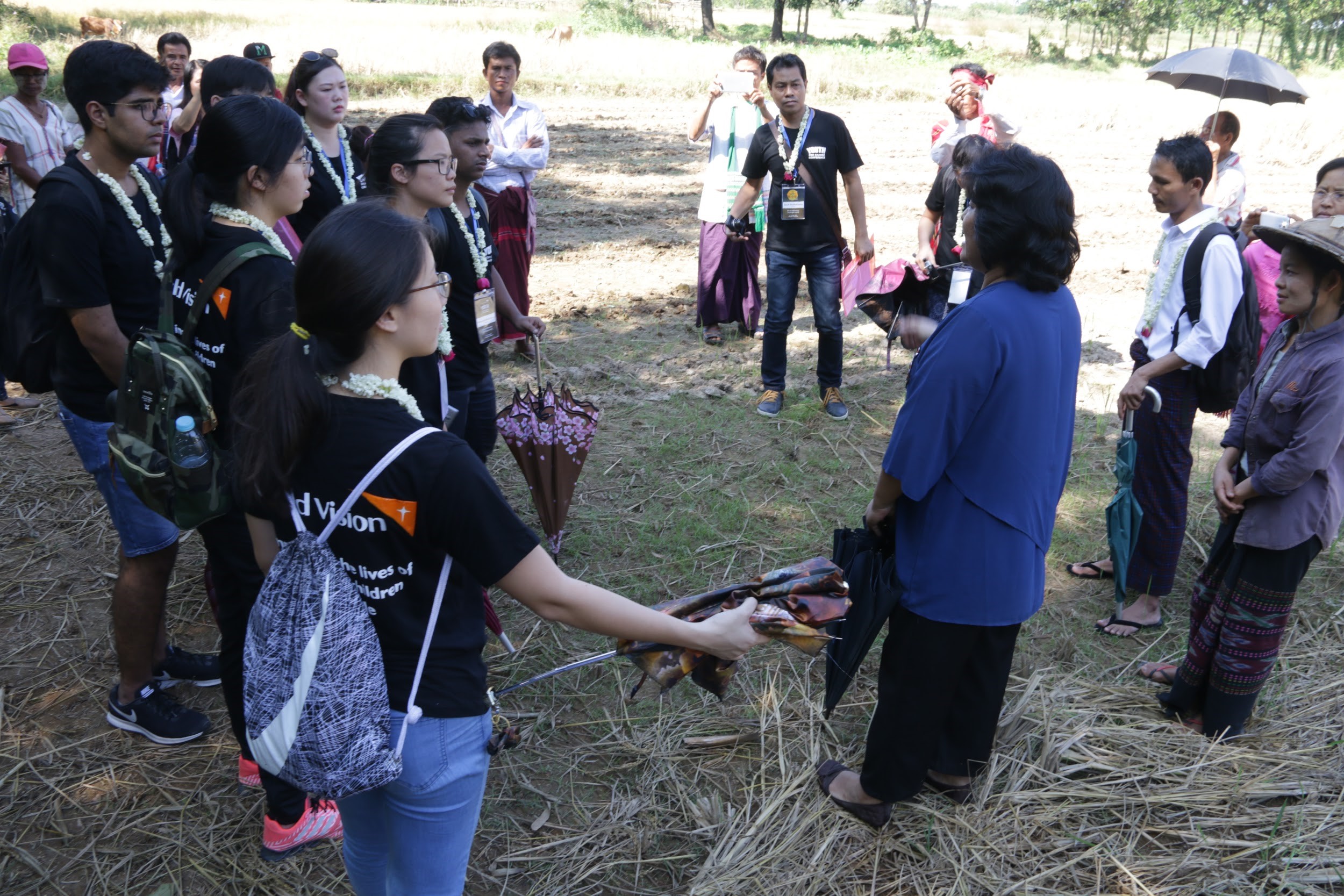 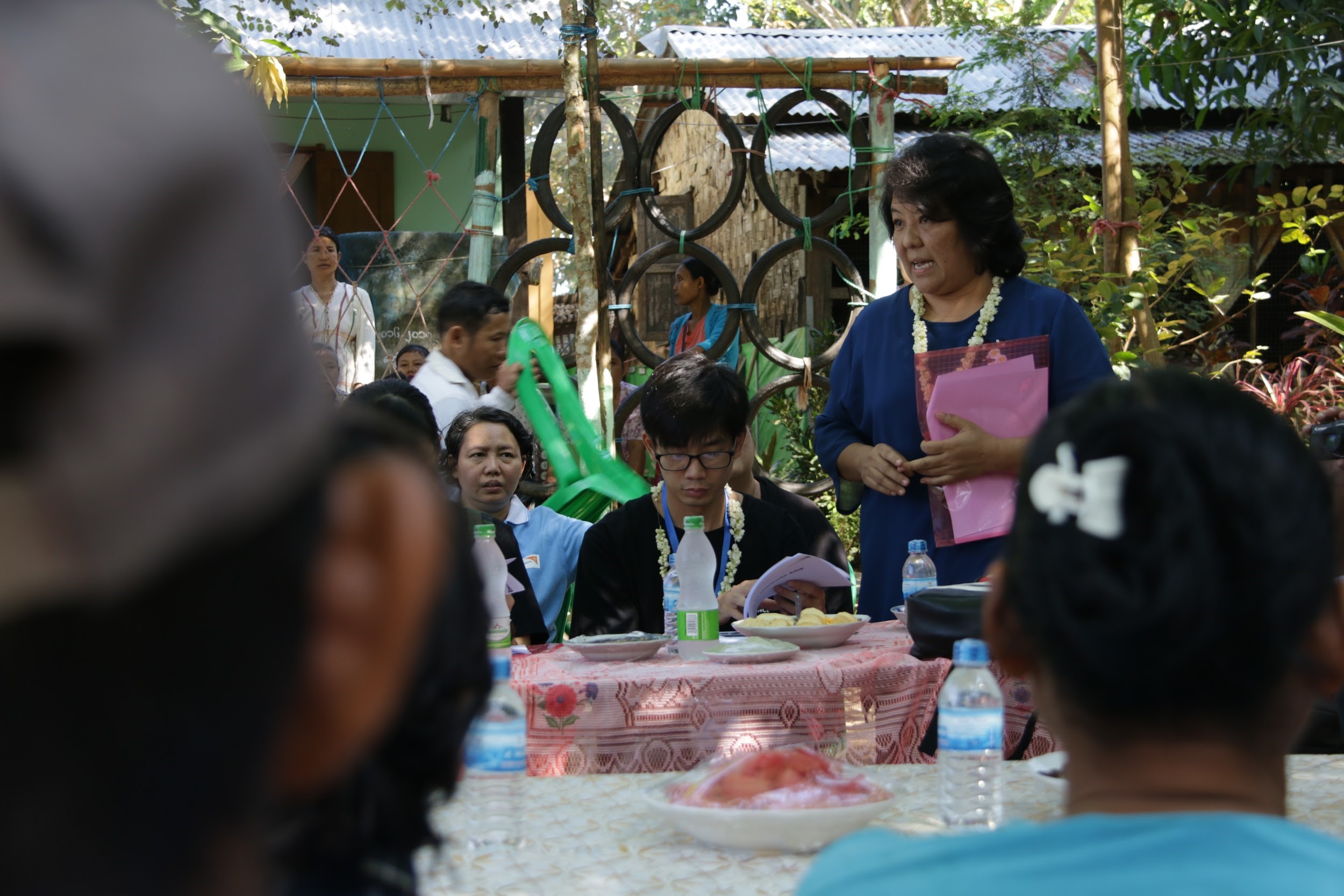 Site visit to Hmabwi ADP, where we met the inspiring Daw Doris Paul

Anyone would be familiar with the well-worn but true saying that we shouldn’t merely give a man a fish but teach him how to fish. Interestingly, Daw Doris Paul spoke about one particular challenge she had occasionally encountered, a challenge which Dr. Kathryn had also mentioned earlier in the conference programme: that while you can teach a man to fish, he may not want to fish, and may be inclined to pursue a path less fruitful instead. That was something that had not occurred to me, that those we may wish to help and empower may not recognise the need to be equipped in ways that would enhance their well-being and, perhaps even more crucially, the well-being of their children. That in turn brings a whole host of other challenges. The point being: until you go to the ground, and speak to the people running the programmes, you may never realise the depth of the situation and the scale of the challenges. Perhaps that sounds self-evident, but often we implicitly and complacently assume that because we have read this or that article, we already understand this or that issue. There are complexities and challenges that only the people who work day to day in these environments can explain. That was a humbling takeaway that I hope I never forget.