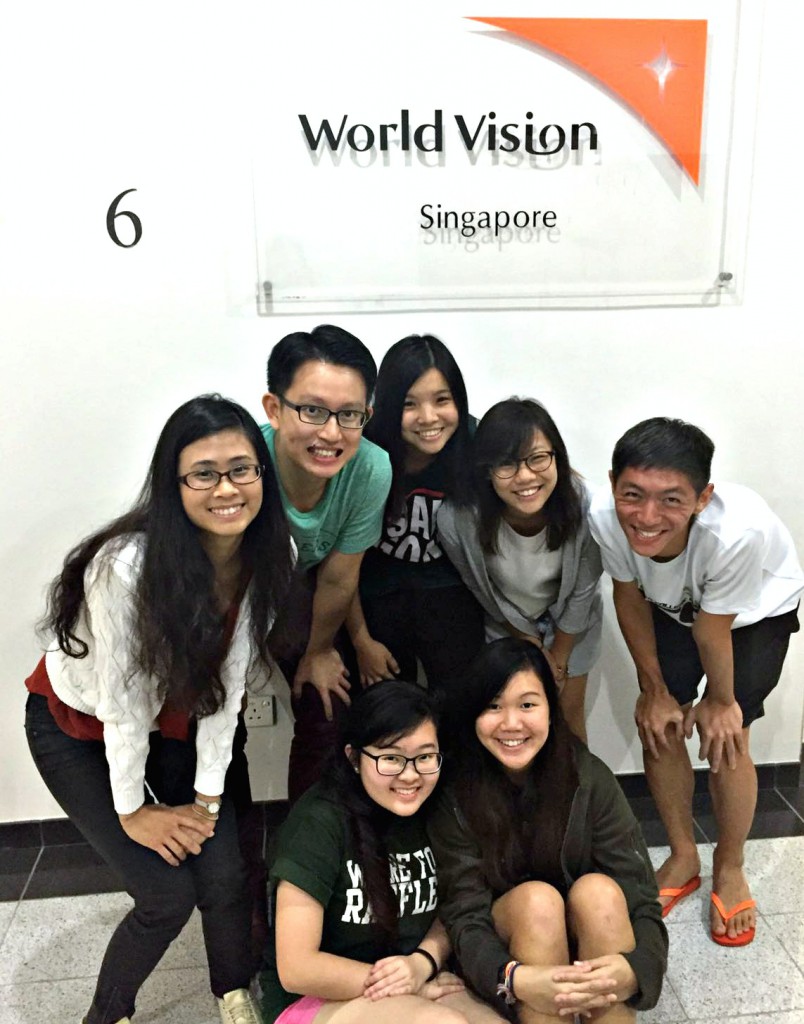 Musicatalyst, our chosen name for World Vision Singapore’s music advocacy wing/branch/programme/experiment. Simply and accurately put, we aim to use music to spread the message that everyone can and should play a part, and ultimately inspire them to play a role in World Vision’s mission to enable children all over the world to experience the fullness of life.

Let’s begin with Karen. She would ultimately give credit to God, but it’s fair to say she’s the mastermind behind the WVMusicatalyst initiative. First impression: she looked a little like a squirrel and got excited/emotional at a video she’s probably seen like 20 times? But then it quickly becomes clear she is wiser than she lets on, sharper than any one of us, practical in getting things done, and probably as passionate as the day she joined World Vision. I think all of us already know we’ll be relying on Karen a lot, for a whole host of reasons from administrative clearance to possibly conflict management? Karen is basically our mum, the kind who gives us just enough advice to let us still feel that the ideas were ours, and enough freedom so we feel entirely unrestrained - but she’s always there, guiding the discussions and inspiring confidence.

Andrew is as old as Karen, but his demeanor suggests a far younger soul (well, Karen too, but she’s mum). He is utterly unashamed in proclaiming the love of God that has so obviously touched him. Surprisingly, when it comes to music, he's a bit shy at first. He knows that his songs are meaningful to him, but was somehow afraid that we wouldn’t get it. Well it turns out his song was the first that we chose to practice and attempted to arrange as a music group. There’s a rare caring heart in Andrew, one that cares little for fame and the indicators of success that the world is often obsessed with, but one that cares deeply about people - about the people we want to help, and the people who are trying to make that happen.

Peiwen is far too humble and genuine to have just gotten a post-grad from Harvard. She finds humour in the mildest jokes and listens intently to all that everyone says. And yet her systematic thought process, the clarity in the articulation of her ideas, and the sheer professionalism of the work she produces leaves no doubt as to the extent of her capabilities. She has the older cousin vibe, sharing her ever-insightful opinions after everyone else has shared theirs and failed to raise something crucial. When discussions start getting convoluted and directionless, it’s usually either she or Karen that tactfully brings things to a constructive close, something I think we are all always grateful for. Apparently she catches Pokémon with my brother too, a bizarre coincidence that I’m just going to leave here.

Falice just turned 21! She’s sort of like our link into the local music industry. She seems to know everyone, and has heard of even the less well-known bands/musicians. She strikes me more as the emo-kind, in a good way! The sort that can really feel for a cause, and then re-construct or re-present it through lyrics and melodies. There’s a charming innocence to her smile, and the way she sings. It’s a purity that doesn’t get distracted by notes, chords and arrangements, but has a single-minded determination to convey a sincere message. She’s not afraid to try, and readily makes others’ ideas come to life. The jamming sessions are so fruitful with her around! With added dimensions of happiness, carefreeness and openness to the music-making, there’s plenty of excitement to look out for every time we meet (:

Chen Hui actually conducts certain school Chinese orchestras if I’m not wrong. How cool is that. She’s like the older cousin who’s out there doing real stuff, actually inspiring children to love the music that so many of us are forced to make. We can always count on her to chirp into the discussion with innovative ideas that are actually very practical. She also willingly and with absolutely no complaint took a cab across Singapore to be on time (how many people would do that??). Haven’t quite formed an impression of her though, the more raw side of things. I do look forward to, and I’m sure I’ll be pleasantly surprised time and again!

Finally, there’s Ashley. A little fireball ready to take on too many responsibilities and still do an outstanding job at each. Among her many talents, her ability to play the violin immediately makes her indispensable. Her earnest optimism was immediately endearing, but a few conversations later it becomes apparent that she is wise beyond her years, with a resume of activities and experiences that put NUS graduates to shame. If Karen is our mum, Ashley’s our youngest sister. Not for a lack of maturity, but because of the vast age gap, I think we can’t help but hold that impression in the back of our minds. She completes us, and brings a sparkle of pure joy that I at least have seem to have lost over the years.

Where do I fit in? I’m not sure. All their musical journeys have been inspiring in and of themselves! Surprisingly, I’m the only kid with the typical ‘forced to learn instruments from young’ story and later on was endlessly grateful to parents for having insisted. As things stand I’m just grateful to be part of this little community of people with the biggest hearts. These are good people I’m surrounded by. I’m thankful for every one of them, and excited to use our music to catalyse some real change.