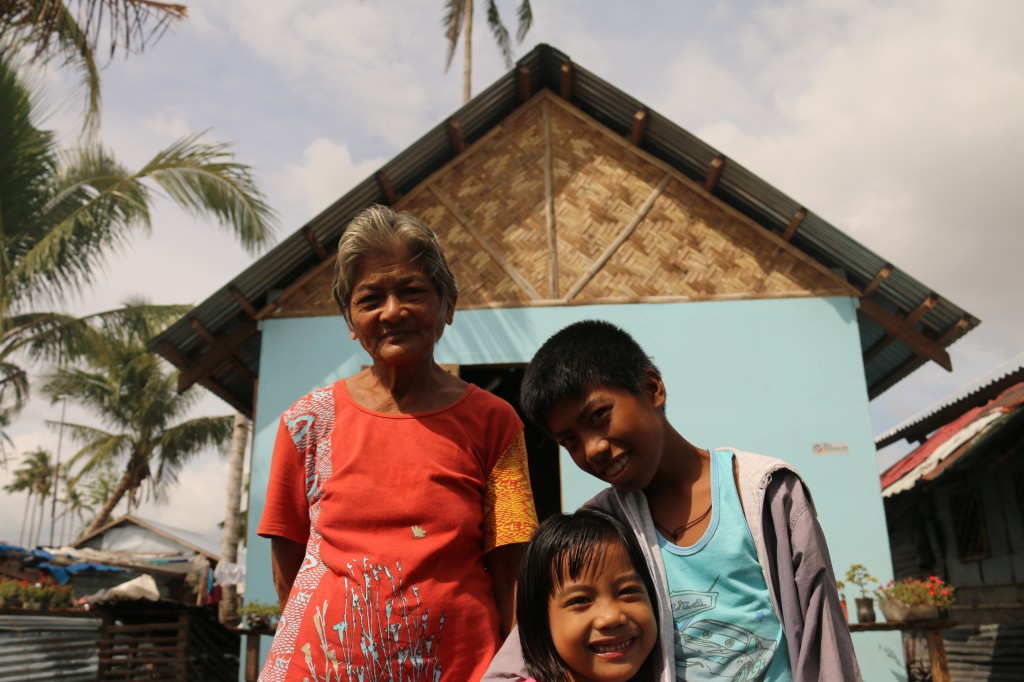 Jaymar, 12 and Zyra, 5 are Josefina’s joy. When both children were asked of their new house, they said that they enjoy a bigger space. The house also survived Typhoons Hagupit and Jangmi last year.

As of 29 January, Typhoon Hagupit has affected a total of 944,249 families (4,149,484 individuals). 1,760 families are still in the 21 evacuation centres. Thankfully all roads and bridges in affected areas are passable and key airports are also operational. Schools have since resumed classes in the affected areas. Humanitarian partners are continuing their support to authorities at sub-national level with the provision of relief supplies and information management. 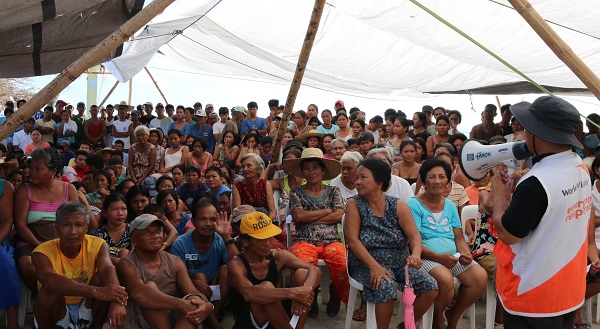 As of 22 December, Typhoon Hagupit has affected a total of 918,055 families (3,924,930 individuals). The DSWD (Department of Social Welfare and Development) is leading the response in key areas of need – including emergency shelter, camp coordination and management, and the distribution of food and NFIs – and augmenting local authorities’ relief operations. The Department of Health is also working concurrently to address WASH and health and nutrition issues. Geographically isolated areas, including several remote islands, have been difficult to access, posing logistical challenges to humanitarian operations.

World Vision is targeting to reach 27,800 beneficiaries (5,560 families) with the distribution of essentials like food kits, hygiene kits, water purification tablets, and cash for work. This will be followed by transitional shelter, child friendly spaces (CFS) and Water, Sanitation and Hygiene (WASH) activities

Since making landfall on Philippines on Saturday, 6 December, Typhoon Hagupit has affected a total of 902,291 families (3,852,672 individuals) in the Eastern Samar, Leyte and the Bicol Regions. All roads in the affected areas are now accessible and bridges are passable, with all key airports (including Tacloban airport) functioning too. Schools have also resumed classes in all affected areas with the exception of Borongan and Catbalogan cities.

World Vision is committed to providing relief assistance to families and communities that are affected by Typhoon Hagupit as quickly as we possibly can and help save lives by reaching 22,500 beneficiaries (4,500 families) with the distribution of essentials like food kits, hygiene kits, water purification tablets, and cash for work. This will be followed by transitional shelter, child friendly spaces (CFS) and Water, Sanitation and Hygiene (WASH) activities 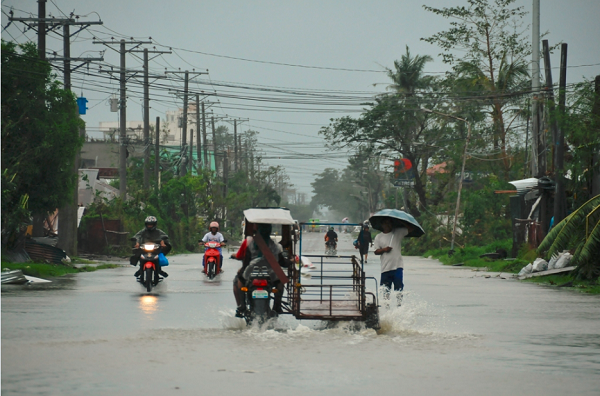 A total of 895,477 families (4,218,935 individuals) in Eastern Visayas were affected. The Philippines Red Cross has indicated that 27 people have been killed across all impacted regions, however it is expected that the number will rise further in the coming days. Power is also out in 17 provinces across the Visayas and Luzon due to the typhoon, and communications remains a challenge, limiting the information from municipalities in the northeast areas of Northern Samar province.

World Vision has completed relief distribution to 446 families in evacuation centres in Tacloban City composed of water and hygiene kits (hygiene kits composed with soap, detergent, toothpastes and toothbrushes, sanitary pads, underwear and shawl). Assessment teams were sent to eastern and northern Samar provinces to meet with government agencies and check the needs of affected population. World Vision is in coordination with the city governments of Tacloban City and Borongan, DSWD (Department of Social Welfare and Development), the local municipalities in Samar and the local agencies in the Visayas region for assessment of needs and joint preparedness.

Typhoon Hagupit -- its name means "lash" in Filipino -- moved west-northwest and targeted the city of Legazpi, just north of where the storm made landfall on Saturday, 6 December. World Vision assessment teams are on the ground in Tacloban, just hours after powerful Typhoon Hagupit slammed the region still reeling from last year’s deadly Typhoon Haiyan. With the storm threatening 50 out of the 80 Philippines provinces, 100,000 people evacuated their homes in Tacloban alone, and now daylight has given locals, emergency services and relief agencies the chance to assess the damage.

World Vision’s Emergency Response Director Andrew Rosauer is on the ground with his assessment teams to find out the impact the storm had on Tacloban. When Typhoon Haiyan hit 13 months ago Tacloban felt the full force of the storm, and with recovery efforts still going on it was feared it would bear the brunt of this typhoon as well. However, it appears the worst is over for Tacloban. Rosauer said his team has a mammoth task ahead.

“After the fierce rain winds we’ve experienced overnight, our efforts are focused on providing urgent relief to people who need it most,” Mr Rosauer said. “We are very concerned for people who are affected and in need of assistance – many who survived the world’s deadliest storm just 13 months ago.” he said. 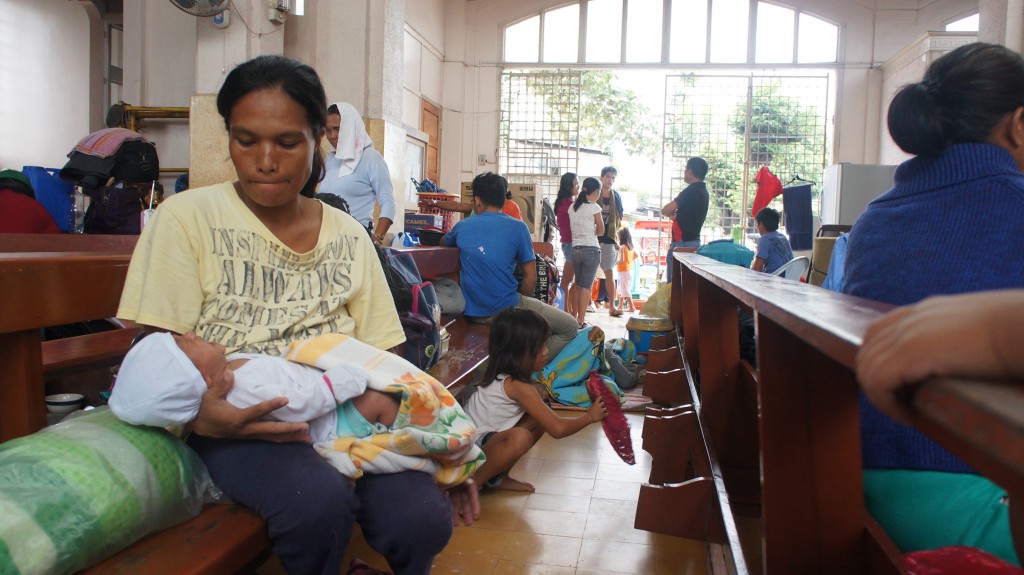 World Vision, which currently operates for the recovery in the Haiyan-stricken areas of Leyte, Samar, and Panay Islands, has prepositioned at least 1,000 family kits and reserved 11,000 more to address the urgent needs of disaster-affected families provoked by Hagupit.

Rosario Moral, 79 is one of the people at an evacuation center in Albay. "We've been staying here for nearly three months since we fear the volcano and now we have to weather the storm. It's better to count days in evacuation centers than count casualties among your loved ones," she says.

Preparedness for Hagupit has undoubtedly been a lifesaver this time around, with people voluntarily evacuating from vulnerable areas to safer ground. Tacloban’s evacuation centres are full, with concerns already growing around sanitation in the coming days. World Vision emergency staff is working closely with the UN, national and local government disaster response teams to assess the damage and begin a response as soon as possible. The biggest challenge for storm survivors will be emergency food and safe drinking water.

World Vision has been operating in the Philippines since 1957 and has decades of experience in responding to large scale disasters in the country. We have highly experienced staff in the affected, and potentially affected, areas. They have already been working around the clock to prepare for the impact of the typhoon and ensure life-saving aid can be rapidly delivered to those in need as soon as possible. 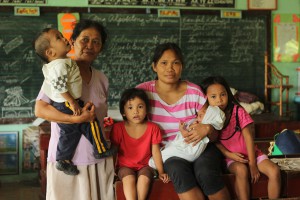