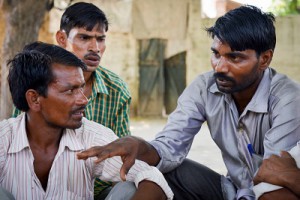 “I and a few men from the group will inquire about this family and the decision taken to marry their teen daughter,” he says. “Like we intervened in Rani’s case, we will speak to the mother of the girl and counsel her.”

Rani* is a 15-year-old girl living in a nearby slum. Not long ago, her father, Lalit*, had been convinced that traditional early marriage was best for his two daughters. If they married into the same household, he had to pay only one dowry. Rani was arranged to be married in November 2014 to her older sister’s brother-in-law. (*Last names omitted to protect identity.)

“This custom of dowry,” Lalit says, “has been prevalent for generations and we, being the girl’s family, have to give, no questions asked. We have to give in cash and [items] like TV, coolers, utensils. If we don’t give, then the family is ridiculed and shamed.”

Society’s skewed understanding of a girl’s worth—merely as a profit-and-loss venture—temporarily blinded Lalit. Then he met with the Men Care Group, a World Vision programme that educates and equips Agra’s men on the inherent value of women and girls. Lalit came to understand that Rani is still growing and that early marriage could cause health problems. Marrying later also allows Rani to stay in school and become better equipped to be a wife and mother. The Men Care Group also urged Lalit to teach his son the same values.

Members of the group support one another as they lead their families with empathy and encouragement. Other World Vision-sponsored groups equip adolescent girls and boys to be confident in themselves and supportive of both genders. 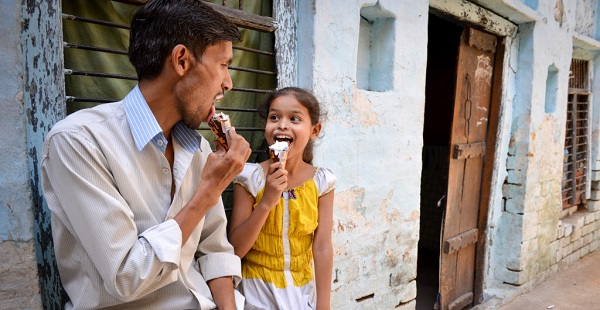 Mangay Lal, a member of the Men Care Group, treats his 11-year-old daughter Marhima to an ice cream cone. He's taking it upon himself to safeguard the future of his daughter.

As the meeting under the tree closed, the men are determined once again to convince a parent—this time a widowed mother—not to marry off her teenage daughter. Mangay Lal, a Men Care Group member, says the tradition of early marriage must be broken, and he’s doing his part to keep girls from bondage.

“We have been made to believe by society that a girl is someone else’s property and will marry, so why should we invest in educating her?” Mangay Lal says, glancing at his daughter, Mahima, playing in the distance.

“World Vision came, they saw the darkness we were living in, they asked us to come to the light,” he says. “And that light is, with help of our understanding, creating a healthy environment where we care for our families and community and where our children—especially girls—can study to rise above and empower others.”

World Vision protects children by raising awareness of risks in communities and provides support for recovery to exploited children.