I went to Mongolia, quite glad to escape the haze and all ready to embrace the endless  expanse of blue skies. Some trippers  who had visited before noted that there was much development on the way to Uvurkhangai. There were fewer potholes and now a packed KFC in the middle of the dessert surrounded by camels, horses and sheep dog. It couldn’t have been more exotic.But it was the impact of World Vision's work and interacting with the children and communities that really moved our hearts. In this tour with a difference and for a difference, we walked with the poor through our 6 days. Over 42% were poor or extremely poor in the area we helped.

The impact of World Vision's work was indirectly seen in the 2 female headed households we visited. They were at different stages of assistance with income that were generated from gifts provided through World Vision’s support.

Of Impact and Development 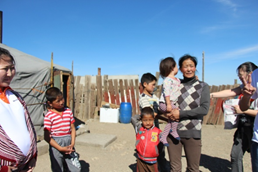 Erdenebileg heads a household of eight, supporting five children and two grandchildren. Because of her struggling family’s need, she was targeted through World Vision’s Graduation Approach for immediate economic intervention. The Graduation approach identifies vulnerable families and World Vision supports them with neccesities like food and clothing. They are also taught skills to help them save and start small businesses.

Her children, including 11-year-old Buyanbayar, received support in the areas of food and clothing to tide them through the harsh winters. Through the programme, Erdenebileg received training on savings and income management. World Vision also supported her with a sewing machine to kick-start a small business in shoe-making. Today, she is making a steady income, while also applying and passing on what she has learnt by leading a savings group. 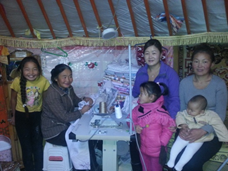 Bilguunzaya is a ten-year-old girl whose parents have separated. She lives with her mother, Sanjidmaa, as well as four siblings and three nephews. Sanjidmaa had struggled to find gainful employment and to feed the many mouths in the family. Through the Graduation Approach, however, Sanjidmaa and her eldest daughter received vocational training and support in the form of a sewing machine. Now, Sanjidmaa and her daughter sew and sell bedsheets, which allows them to earn an income of approximately S$350 a month and put enough food on the table. For Bilguunzaya, this is a dream come true.

Education Beyond the Books 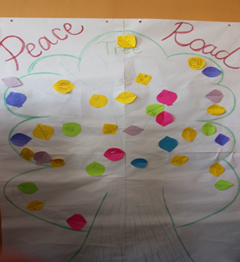 In education, I saw the empowerment and child well-being come alive in the community through Peace Training, a World Vision programme to promote understanding and where children are taught how to have positive relationships, extend forgiveness, and kindness towards the vulnerable.

Tungalag,  aged 12 shared, “Before I gossiped and had bad relations with my mother. But now I have a close relationship with my mother and helped the elders by fetching water. Also, I am more open minded”.

When Broken Spirits were Restored

But it was in Ulan Bator that my heart really broke with the stories of children as young as 14 who spoke of silent struggles to make sense of the pain and anguish of not having parents to care for them while they were growing up. Otgonjargal is one of over 28,000 vulnerable children in urban Ulaanbaatar who has been helped through World Vision’s child development programme since 1997.

At first encounter, Otgonjargal came across as a normal teenager who loved to sing. But as she shared her story, she broke down several times when she could not find any words to describe how she felt as a pre-schooler, left alone with sisters when her mother was imprisoned and her biological father who was an alcoholic, died in 2005. Beyond the language barrier was a real child who could have been my daughter but born to very difficult circumstances.

At a critical time, she was helped in ways that allowed her to find herself and get back on the track of life through World Vision’s work at the Light House, a shelter.

There are many talented but impoverished children like her are seeking assistance with swelling rural urban migration fuelled by the lack of job opportunities and unemployment in the villages.