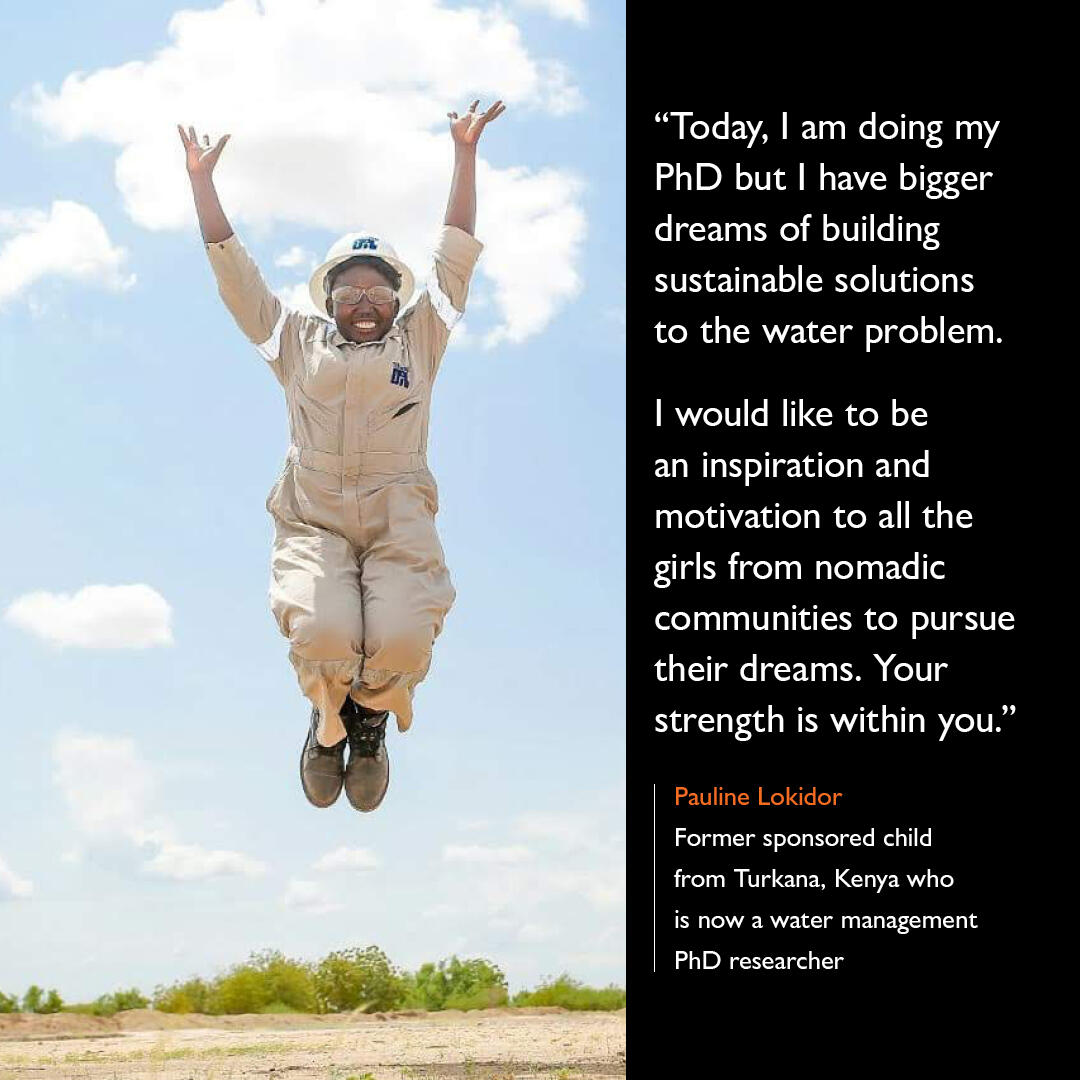 Pauline was trained to be a Turkana wife: to make traditional huts and milk the goats and camels. But today, she has a Bachelor’s and a Master’s degree under her belt and is studying her PhD, with her sights set on bringing water to her village so that girls like she was no longer have to walk hours every day fetching water instead of going to school.

“Perhaps I can even save the future life of a girl or woman from this daunting struggle. I wanted to change the narrative in Turkana in my small way,” Pauline says. 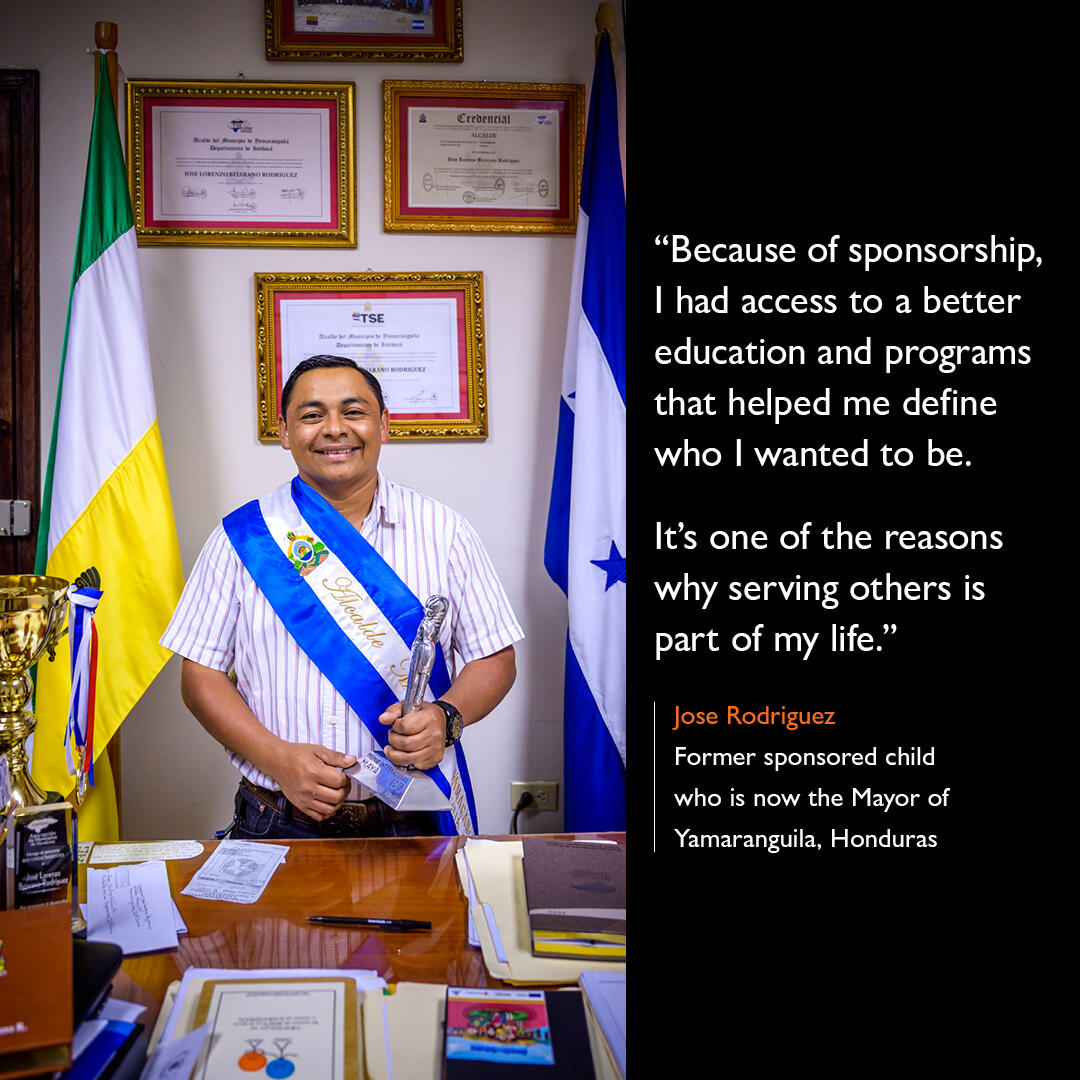 Jose Rodriguez
Former sponsored child who is now the Mayor of Yamaranguila, Honduras

Mayor Jose Rodriguez has held his position in office for 12 years. But he wasn’t born to the position of power – in fact, just the opposite. Jose was once a sponsored child and his experience motivated him to become a leader in his community in Yamaranguila.

Now a strong advocate for education, Jose believes it is the key to social development in the region. 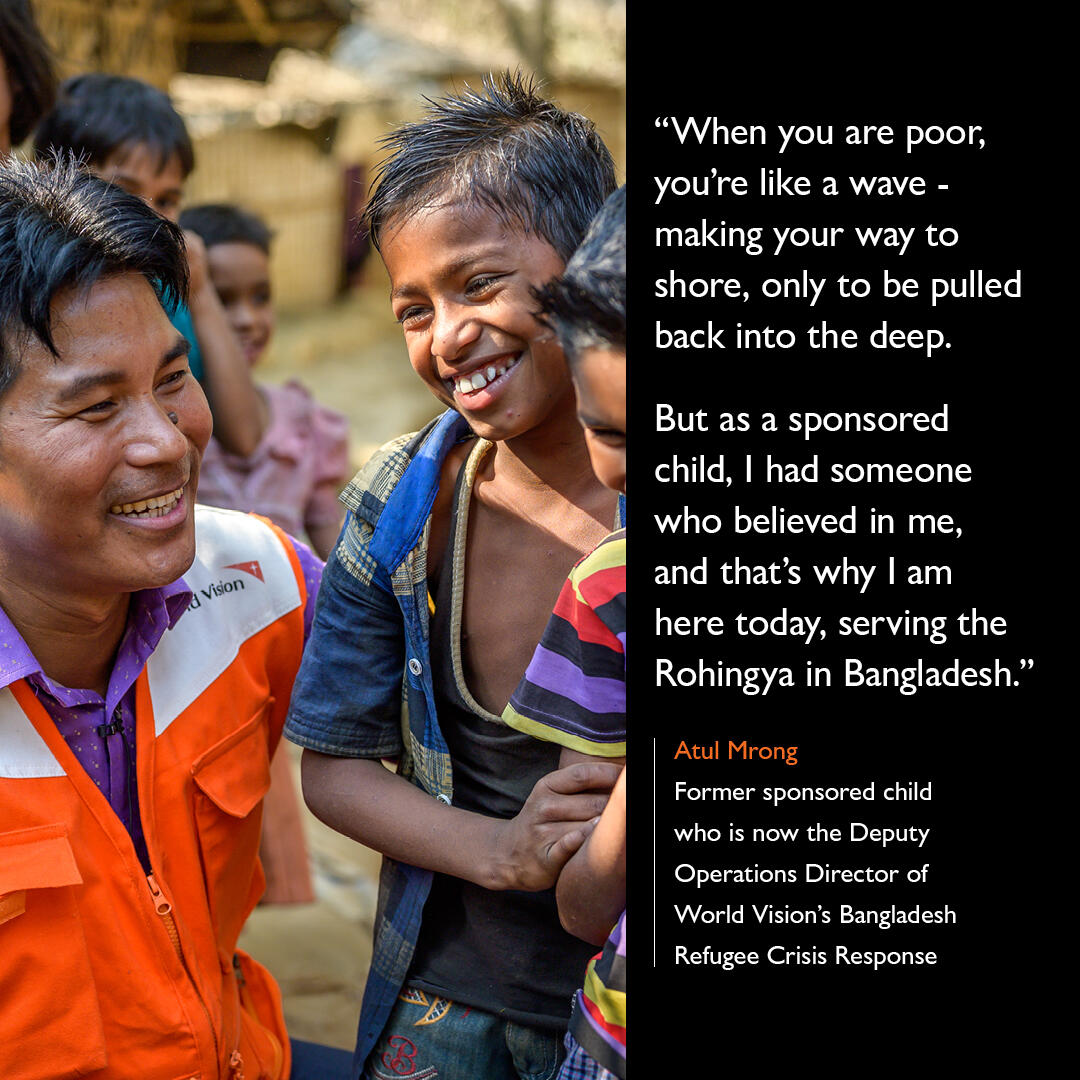 Atul knows what it’s like to be a child whose future hangs in the balance. He grew up in a poor family of seven children in Bangladesh and it helps him relate to the 450,000 Rohingya children who have arrived in the camps with nothing but the clothes they are wearing. 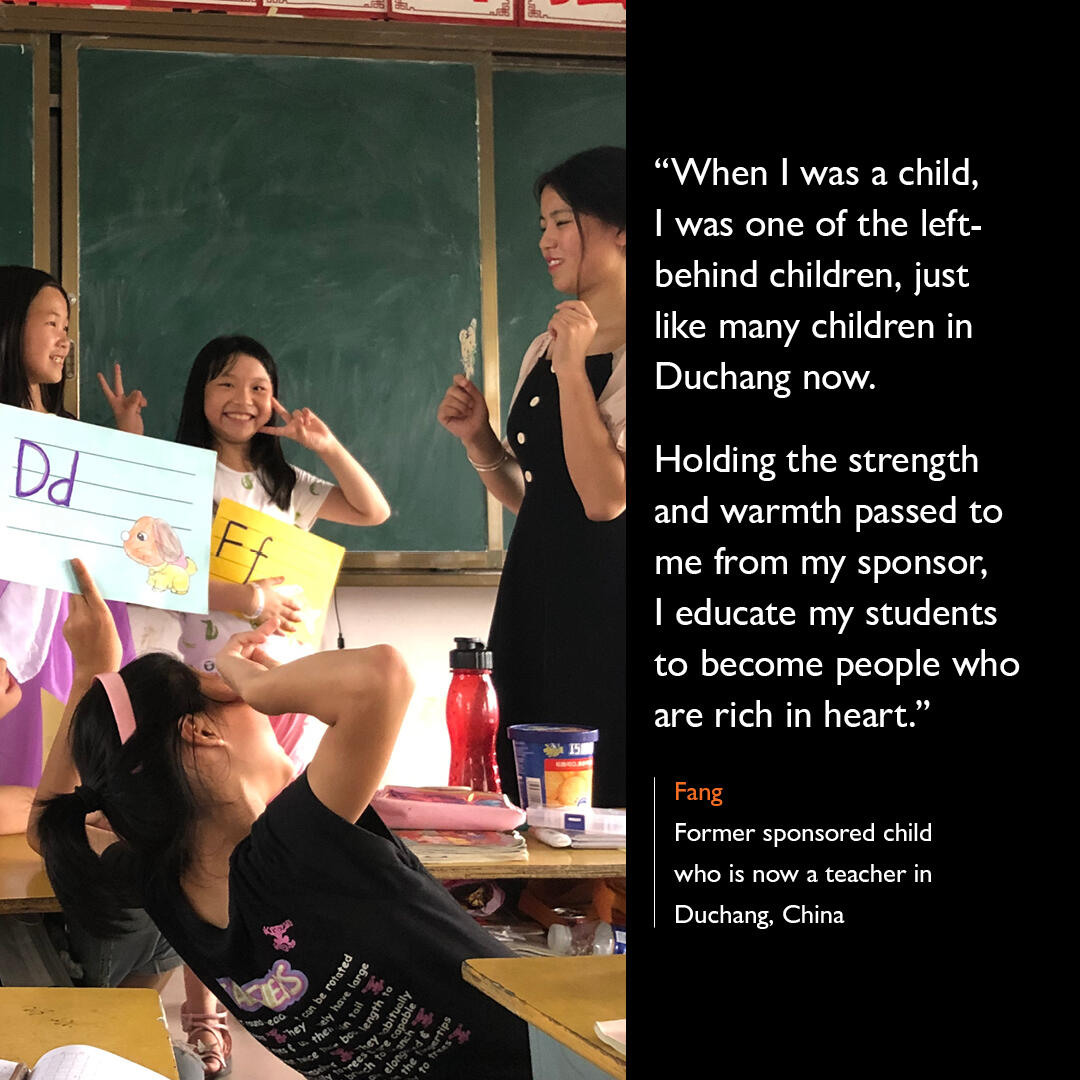 Fang
Former sponsored child who is now a teacher in Duchang, China

Fang and her younger brothers and sisters grew up living with her grandparents, while her parents lived far away working. Money was always scarce, but then –

“The year I was nine, an unexpected fire burned down the house where we lived. It was really a hard time for us,” remembers Fang. “But the memory that stuck to me the most at that period was receiving letters from my sponsor. Every letter was a joy to me. My life was brightened with all the care she gave me, and I even had better scores at school.”

Fang became a teacher to pass the love and care she received as a child on to other children like she was.

“The gratitude I feel is sealed at the bottom of my heart,” she says. “I shall never forget.” 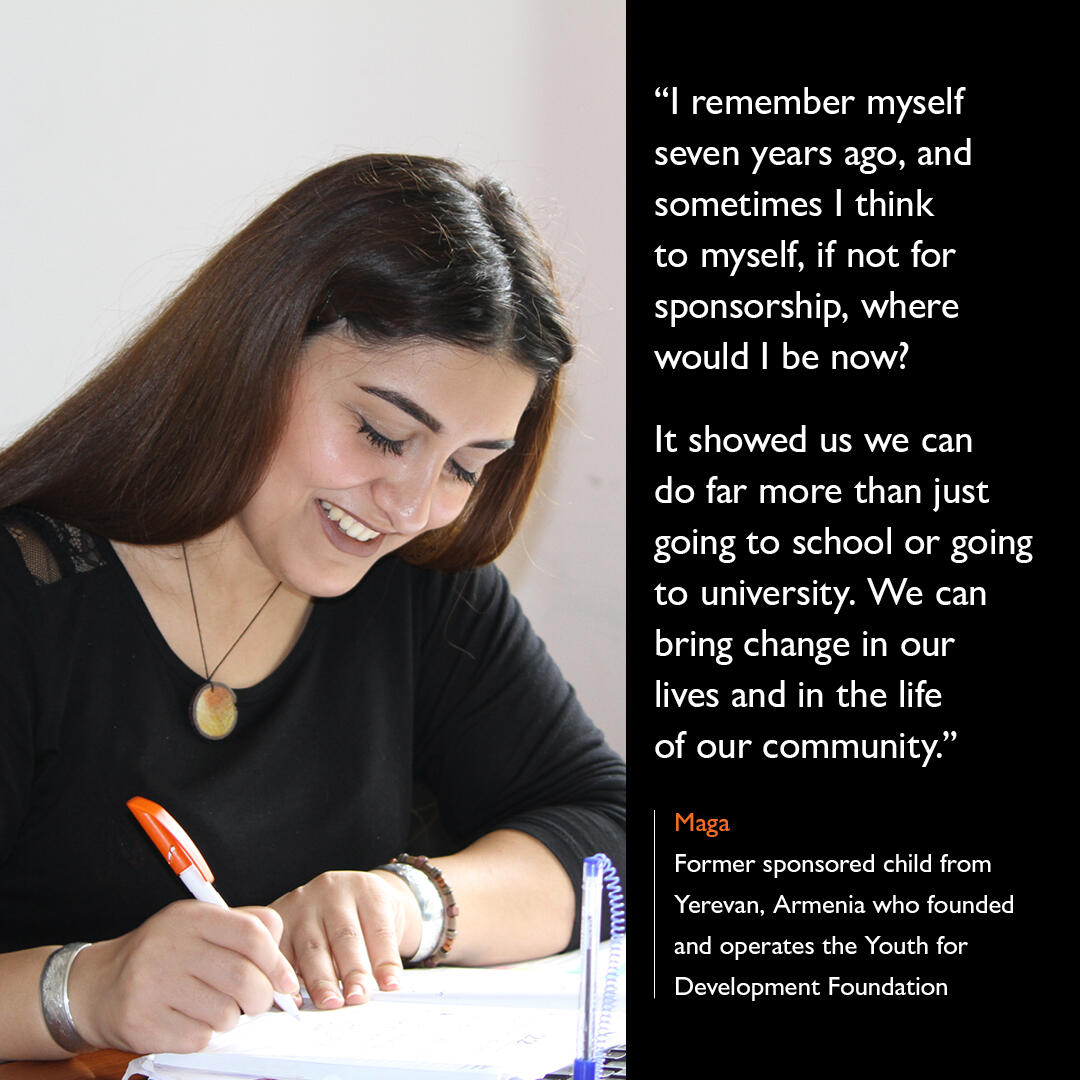 Maga
Former sponsored child from Yerevan, Armenia who founded and operates the Youth for Development Foundation

“As a child, I was so excited for World Vision staff to come to our house or call my mum to include me in activities - theatres, learning events, camps and excursions. All of these were so interesting to me as a little girl who had seen nothing in her life except the school and her family’s house,” remembers Maga.

Inspired by her sponsor’s investment in her life, Maga is now giving back. Maga and some friends have established a youth foundation that is helping support Syrian-Armenian refugee women to raise their voices. Artists are painting portraits of the women to tell their story, helping others in the community to understand them better while also raising funds to provide the women with financial support.

“Today, we are teaching others, but we are also continuing to learn ourselves,” says Maga. 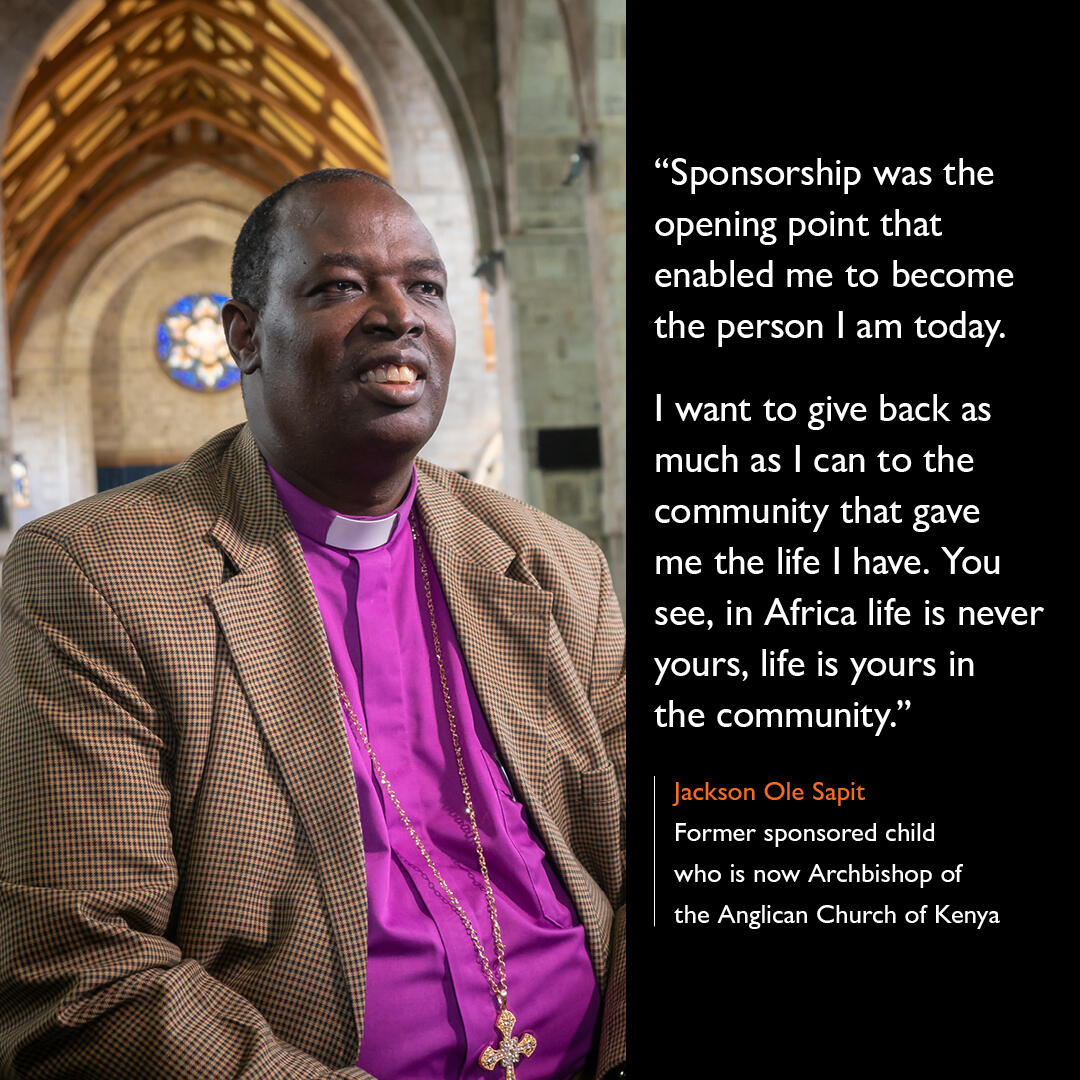 Jackson isn’t sure, but he believes he has about 50 brothers and sisters. But he never got to know most of them, because when he was four years old, his father died. Jackson’s mother was one of 11 wives, and his older half brothers forced him, his mother and sisters off the family land.

It was a hard childhood and for many years, Jackson was bitter. But sponsorship gave him the opportunity to get an education, and in turn, to get a job as a translator for a missionary doctor. And in those years, Jackson learned to let go of his anger and found his calling – as a pastor. Jackson cared for and worked with the people in his community for many years, helping farmers in their fields, starting a school for children and sharing his faith. Today, he is Archbishop.

“I would not be the person I am today if it were not for my sponsor,” says Jackson. “I am forever grateful to them.”

The impact of sponsorship is significant, and often extends beyond just the sponsored child.

In fact, for every child you help, 4 more children benefit too!

Imagine just what you could do, if you managed to gather two or more people together to sponsor two or more children. Learn more about how you can join us on this amazing journey of Child Sponsorship today!