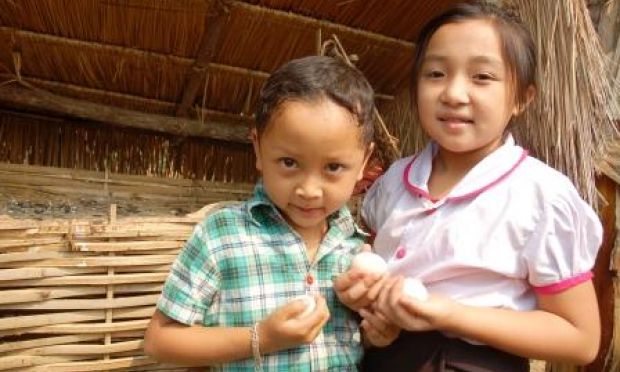 Tony and Ning holding chicken eggs. Smiling, Tony said, “I like to hear the clucking of the hens and waiting for the eggs to hatch.”

A fried egg and sticky rice for lunch puts a smile on the faces of Ning, 11, and her brother Tony. Chicken and ducks raising is not only a source of nutritious food for their family, but also a good source of income.

According to a UN report, two-thirds the population of Lao lives on less than $2 per day and 44% of Lao children under five years old are stunted. Stunting alone is responsible for 15 % of total under-five deaths, which translates into an estimated 2,400 child deaths per year in Lao PDR.

“Child health is closely linked to family income levels,” says Thiphaphone, World Vision Laos Health Manager. “When families don’t have any money, they are often unable to provide a wide variety of nutrients for their children and keep their children in school.” 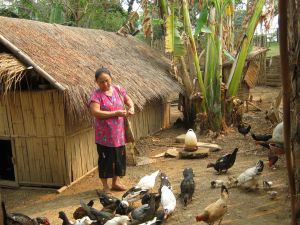 Vilay Kindavon, 66, from Houyhia village of Xieng Ngeun Area Development Programme, in Luang Prabang province is among 33 families that volunteered to raise poultry in 2013. The ADP provided training to the village members about how to raise and care for poultry.

Through the community poultry revolving fund, farmers were trained on raising, taking care and breeding of poultry to improve their family’s food security and also on selling the excess poultry for much needed income. After the training, each family received a sum of money to purchase poultry (chicken, duck and turkey) and feeding equipment, as well as vaccines.

In just one year the family was able to sell two flocks of chickens, earning 1,500,000 LAK (about USD $187) and has 150 birds left. The money that family earned, went to support their son who studies in the college for the field learning and practice in another district.

“It is not just a good source of food that we can have anytime that we want, but we can easily sell the poultry if we need money to buy thing that we want,“ Vilay confidently shares.

“After the training, I found that raising poultry is not hard as I thought, they just need good care like our children have,” Vilay added with a smile. Before the training the family raised poultry using traditional methods- letting the chickens run free and eat whatever they found on the ground. This caused many of the birds to fall sick and die, especially during the rainy season. 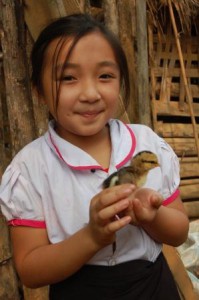 Vilay’s grandchildren, Ning and Tony, will eventually become involved in the poultry raising too.

“I like to collect eggs and help my grandmother feed the small chicks,” said Ning. Every day after school Ning helps to fill the water bottles for the chickens. “I enjoy helping my grandmother.”

"According to the economic development of the district and World Vision Lao, we focus on promoting domestic poultry raising because the investment costs are low, they are easy to care for, and women and children benefit from the programme the most. For example, every 3 -4 months the family can use the poultry for food or sell them at the market,” said Somvonchit Duangpasith, Transformation Development Facilitator on Agriculture of Xieng Ngieun ADPs.

The poultry revolving fund will be moved to another family after 2 years. A family in need will be a priority and selected by other villagers. 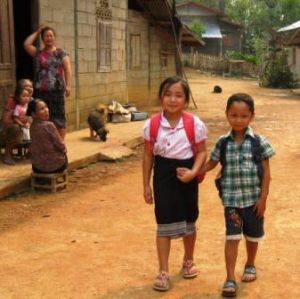 “Raising poultry is the most advantageous compared to bigger animals because we can use them for food right way, such as eggs,’ Ning’s mother Chan said. “I don’t have to worry that I will not have food to prepare for my children.”

Houy Hia is one of the target villages supported by World Vision Singapore. There are 345 people which 688 people and 198 children are involved and benefit from the programme.

World Vision is working in 25 target villages, supporting some 1,937 children through the sponsorship programme, in Xieng Ngeun District in northern Laos.